Car prices have increased as a result of changes in consumer behavior, supply chain issues, and other effects of the pandemic; however, household incomes and wage growth have not kept pace. According to the latest iSeeCars.com analysis, these price increases have resulted in drops in car affordability: new car affordability has dropped 13.3% from August 2019 to August 2022, while used car affordability has dropped 26.7% over the same period. This has priced many popular models out of reach for the average consumer, forcing buyers to use longer loan terms with less money down, or simply choose an older, less desirable vehicle.

“Due to supply chain shortages and increased demand, the rising prices of new and used cars have outpaced income growth,” said iSeeCars Executive Analyst Karl Brauer. “From August of 2019, well before the pandemic lockdowns started, to August of 2022, new car prices increased by almost 29 percent, and three-year-old used car prices increased by 52 percent, but incomes increased by only 13%. People still need to replace their vehicles, so the resulting drop in affordability means shoppers are either taking longer loan terms and paying higher interest rates, putting down less money for a down payment, or even forgoing the kind of car they originally wanted for a lower cost model in order to make ends meet.”

iSeeCars also analyzed the affordability of three-year-old used cars, beginning in April 2019 through August 2022. The iSeeCars Car Affordability Index averaged an almost perfect 99.5 in 2019, dropping to averages of 93.4 in 2020, 81.8 in 2021, and finally 72.0 in 2022. “Used cars were affordable in 2019, but affordability began dropping after the beginning of the pandemic lockdowns, around March of 2020. The drop in affordability accelerated in 2021,” said Brauer. “This coincides with higher used car prices and the lack of used car inventory due to the decrease in new vehicle production, which ultimately led to used car shoppers paying more for their desired vehicles.” 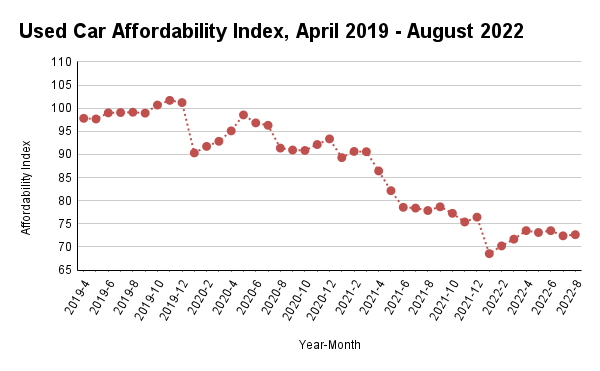 Used Cars that are No Longer Affordable

Using its Car Affordability Index, iSeeCars calculated the pricing threshold for affordable cars and analyzed three-year-old used cars that had been affordable between April and December 2019 but were no longer affordable from January to August 2022. The list includes some of the most popular models, such as the Toyota Camry and RAV4, the Honda Accord and CR-V, and the Subaru Forester and Outback. Here are the 33 vehicles that fell out of affordability over the past three years, in descending order of their used car price in August 2022.

“The shift in used vehicle affordability over the past 3 years has impacted dozens of the most popular cars in the country,” said Brauer. “When models like the Honda Accord and CR-V, Subaru Forester and Outback, and Toyota Camry and RAV4 are no longer affordable, even on the used market, that represents millions of vehicles being priced above what the average consumer can purchase.”

Additional high-volume models priced above iSeeCars’ affordability standard include the Chevrolet Traverse, Ford Edge, Mazda CX-5, and Toyota Prius. All of these vehicles were popular, high-volume new cars, which should result in sufficient used car supply and accessible pricing for most consumers. But the drop in new-car production has caused used car demand, and prices, to rise at an unprecedented rate.

“This is yet another indicator of how drastically prices have shifted on used cars in recent years. When you have a used Toyota RAV4’s price going from $20,534 to $32,090 in 3 years, that’s a clear indicator of affordability lost,” said Brauer. 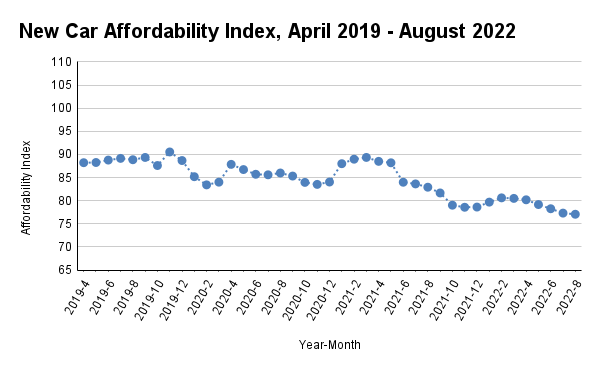 New Cars that are No Longer Affordable

Using its Car Affordability Index, iSeeCars calculated the pricing threshold for affordable cars and analyzed new cars that were affordable between April and December 2019, before the pandemic, and were no longer affordable as of January to August 2022. Four models met these criteria.

“The Jeep Cherokee and the Nissan Frontier had relatively low demand in their segments, but a lack of new car inventory raised the demand for these previously slow-selling vehicles,” said Brauer. “The Kia Sorento was redesigned in 2021 and had a $2,450 increase in MSRP, and the Chrysler 300c limited edition has commanded high dealer markups in recent months.”

“The rise in new and used car prices has led to a drop in vehicle affordability for consumers,” said Brauer. “That means it’s more important than ever for shoppers to choose vehicles that fit their budget. And while it may be tempting to take out a longer loan to minimize monthly payments, or to make a smaller down payment, in this high-interest environment buyers will end up paying even more in the long run.”

iSeeCars.com is a car search engine that helps shoppers find the best car deals by providing key insights and valuable resources, like the iSeeCars VIN check report and Best Cars rankings. iSeeCars.com has saved users over $354 million so far by applying big data analytics powered by over 25 billion (and growing) data points and using proprietary algorithms to objectively analyze, score and rank millions of new cars and used cars.

Search used cars for sale and find the best deals near you at iSeeCars.com.
To get a FREE iSeeCars VIN Report for a car, click here.